The documentary film by Mani Tese on the social and environmental impact of the steel industry told through the eyes of those who do not give up.

Three people, three different lives, three distant places. All of them linked by a single common thread: steel. As a symbol of the world mining and steel and iron industry, steel is the cumbersome background of the new, intense film commisioned by Mani Tese to the director Chiara Sambuchi.

“Spirits I’ve called” is a real emotional journey about the social and environmental consequences of one of the most controversial production chains, which starts from the world’s largest strip mine in the Amazon State of Parà, in Brazil, continues up to the steel plant in Taranto and ends in Duisburg, in the former Ruhr basin, in Germany. 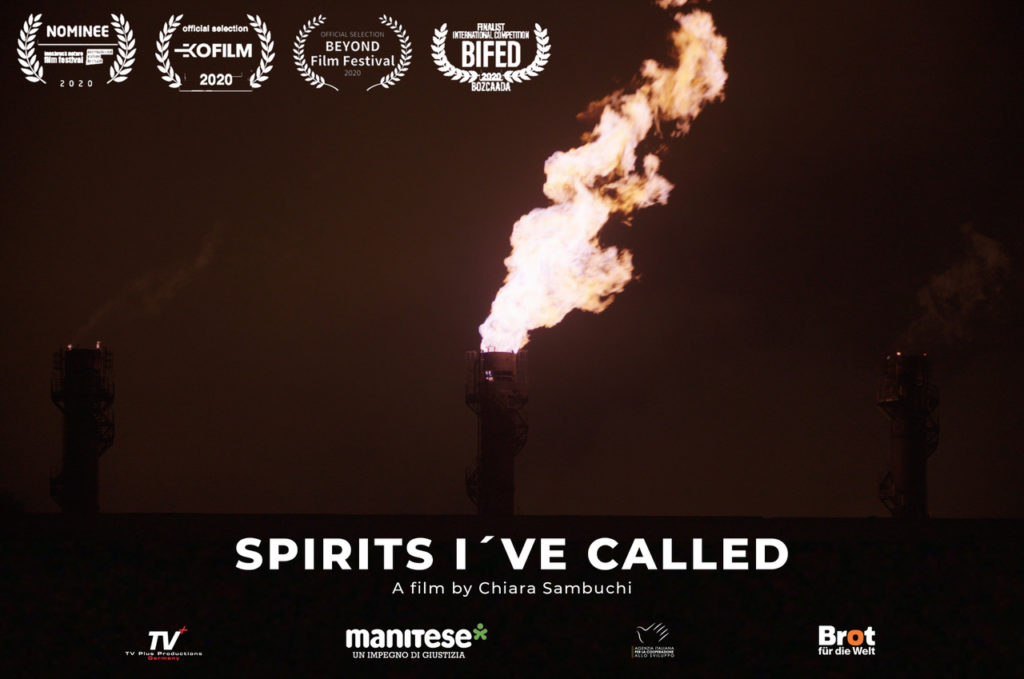 Mani Tese continues its commitment to the promotion of a business culture that is capable of combining profitability with respect for human rights and natural cycles through the proposal of a deep documentary, at times moving, that wants to 'fly high' compared to news of these days and trigger a public debate on the industrial transition required by the challenges of climate change and United Nations sustainable development goals, launched in 2015 towards 2030.

Through an intimate observation of the three protagonists’ daily life, in three symbolic places of a global production, “Spirits I’ve called” describes the impact of the mining and steel industry on the fragile natural balances and on the health of people living close to the production sites.

Pixinga is a Brazilian farmer who fights for the survival of peasants in the Brazilian region of Carajas, which is very rich in iron and in other minerals and it’s occupied, for more than half of its area, by the mining giant Vale. Egbert works strenuously in the German town of Duisburg, in the hearth of the Ruhr basin, on the conversion of a huge steelworks, reclaimed after its closure, into a natural park, where today you can go biking or to the outdoor cinema between blast furnaces now inactive and, next to the old conveyors, you can visit contemporary art exhibitions.
Grazia, a pediatrician from Taranto, has a bee in her bonnet: the closure of the steelworks of her city, so she won’t have to explain anymore to her little patients why the kids, and their parents, in Taranto die before the others.

The documentary film shows not only their daily life but also the personal effort that each of the three protagonists makes against the blind exploitation of human and natural resources, devoted to an endless over-consumption.

Between labour struggles to keep hold of the lands, and life timed by breakfast of milk just milked and bananas’ harvesting, Pixinga takes the spectator on a journey as fascinating as it is tragic, in the heart of the violated Amazon rainforest, until the immense mine of Serra Norte, the biggest open-air mine in the world. In perpetual motion through the streets of the district of Tamburi, the neighbourhood close to the steelworks of Taranto where many of her little patients live, Grazia embodies the twenty-year fight of associations and citizens’ committees against pollution, caused by the chimney’s dioxin emissions and by the constant exposure to iron powders that cover the streets and the buildings of the Apulian city. Egbert, guardian of the recovery of one of the most polluted European region in history, suggests to the spectator how to act individually, in a simple but effective and consistent way, to resist the call of a consumption model no longer sustainable, disrespectful of the natural cycles and of the fundamental rights of people and their community.

“The idea of a documentary film for me always arise from a meeting, a personal story, first listened to and observed, then narrated in an intimate way, remaining as close as possible to the protagonist, participating with an open heart to his concerns, his dreams and his hopes, in short, looking at the world with his eyes.

The biggest challenge in “Spirits I’ve called” for me was to find a film language and a narration capable of combining three personal stories, with the global story of the steel industry and its distortions. Therefore, on the one hand, to describe the reckless and violent exploitation of resources and the sinister indifference for the pain of others, in the name of profit. But also to combine it with the most human of the stories, the real life of three people united by a chance: living in key places for the interests of large world steel groups.

The result was a story far from the chronicle of facts, numbers and statistics, in which the gaze of Grazia, Egbert and Pixilinga is the red thread that guides us from one place to another and through their emotional path of anger, frustration and hope. More than explaining, our protagonists show us, sometimes even through silences and subjective, life in the places of the steel industry. “Spirits I’ve called” is a film about awareness, about the indestructible will to write a new course for their own world and about the sometimes exhausting struggle which our three heroes are willing to deal with, in order to succeed. It is the positive and hopeful response to an Amazonian forest spoiled by the chasm of the Serra Norte iron mine, an open wound with its dark red color, painful to observe in the dense green of the rainforest. It is the reaction to decades spent in Taranto breathing dioxin and burying mothers, fathers, friends and more and more often children, victims of cancer. It is the awakening after decades of tremendous pollution in the Ruhr basin, which finally regains possession of itself.

The role of nature and the contemplation of its beauty are crucial in the film: when, with the blast furnaces finally turned off, nature takes back its ancient spaces long lost, but also where the chimneys degrade it, or when it is threatened by the strip mine and the mining industry. Because this is what the gaze of our protagonists sends us back and reminds us even in the most tragic moments of their story.

During the editing phase, I often wondered if my protagonists admire nature or it is nature that observes them. The truth probably lies in a continuous mutual observation, a perpetual game of references and cornerstone of the dramatic development of “Spirits I’ve called”: what at the beginning of the film is a vague intuition, during the course of the documentary becomes a certainty. The need to radically change the course of the steel chain. Immediately. Without compromises. On a global scale”.

“Spirits I’ve called” is a documentary film produced within the project “New Business for Good”, realized with the contribution of Italian Agency for Development Cooperation and supports Mani Tese’s program MADE IN JUSTICE for a culture of human rights and respect for the environment in companies and in society.