Last night the Riccardo Massa Comprehensive Institute in Milan opened its doors to parents, students and citizens of the neighborhood for the inauguration of the two murals created by children and young people as part of the project “Come L’Okapi”, which promotes educational programs to foster dialogue and overcome standardization.

These murals will continue to testify to co-integration as a daily practice, where different elements manage to find enrichment and harmony.

From the paintings of these small authors and female authors we can draw a daily lesson, which reminds us that differences are part of all social groups, making them rich in colors.

How could one paint in a monochromatic world?

Here are the images of the realization of the murals: 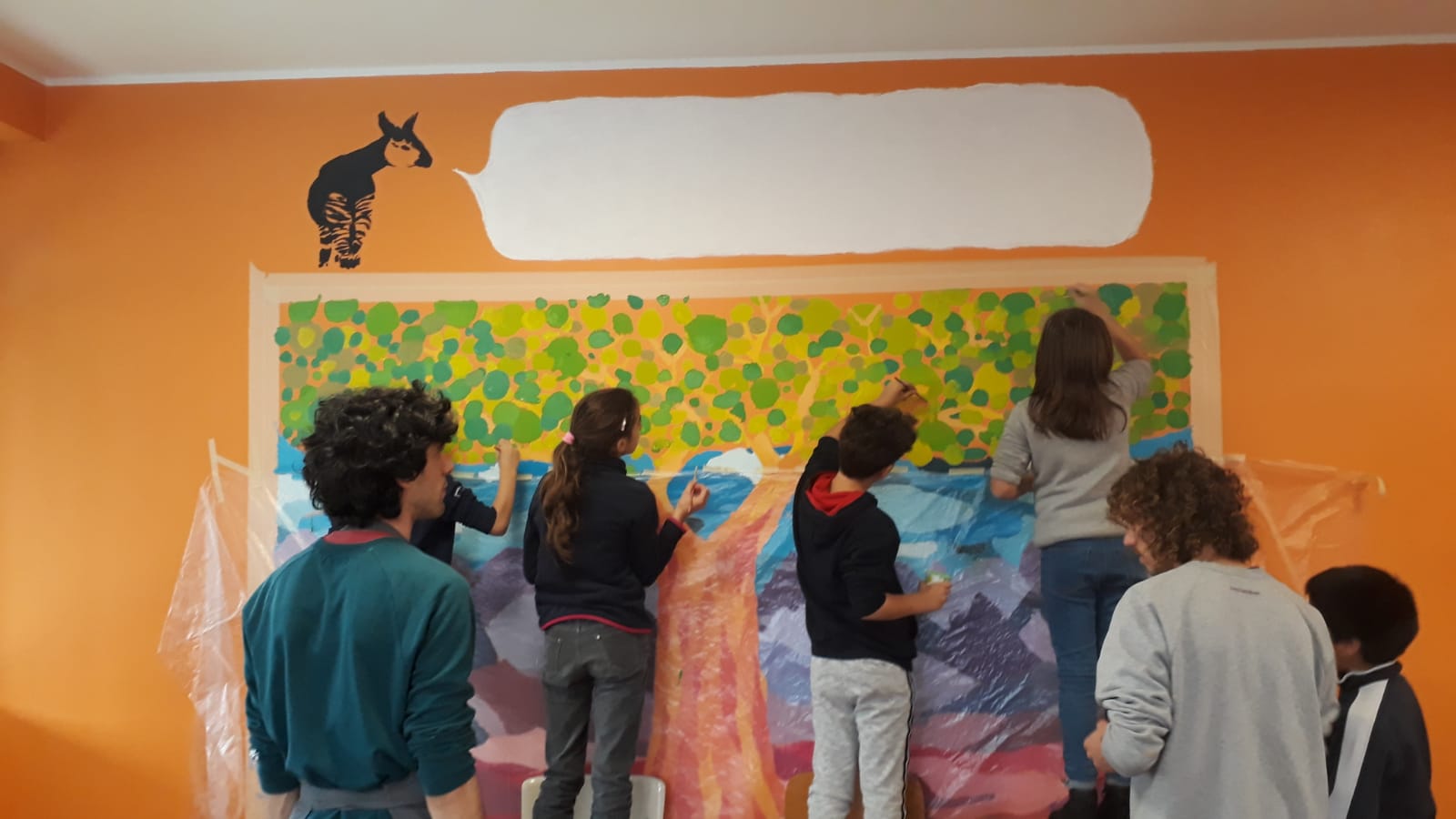 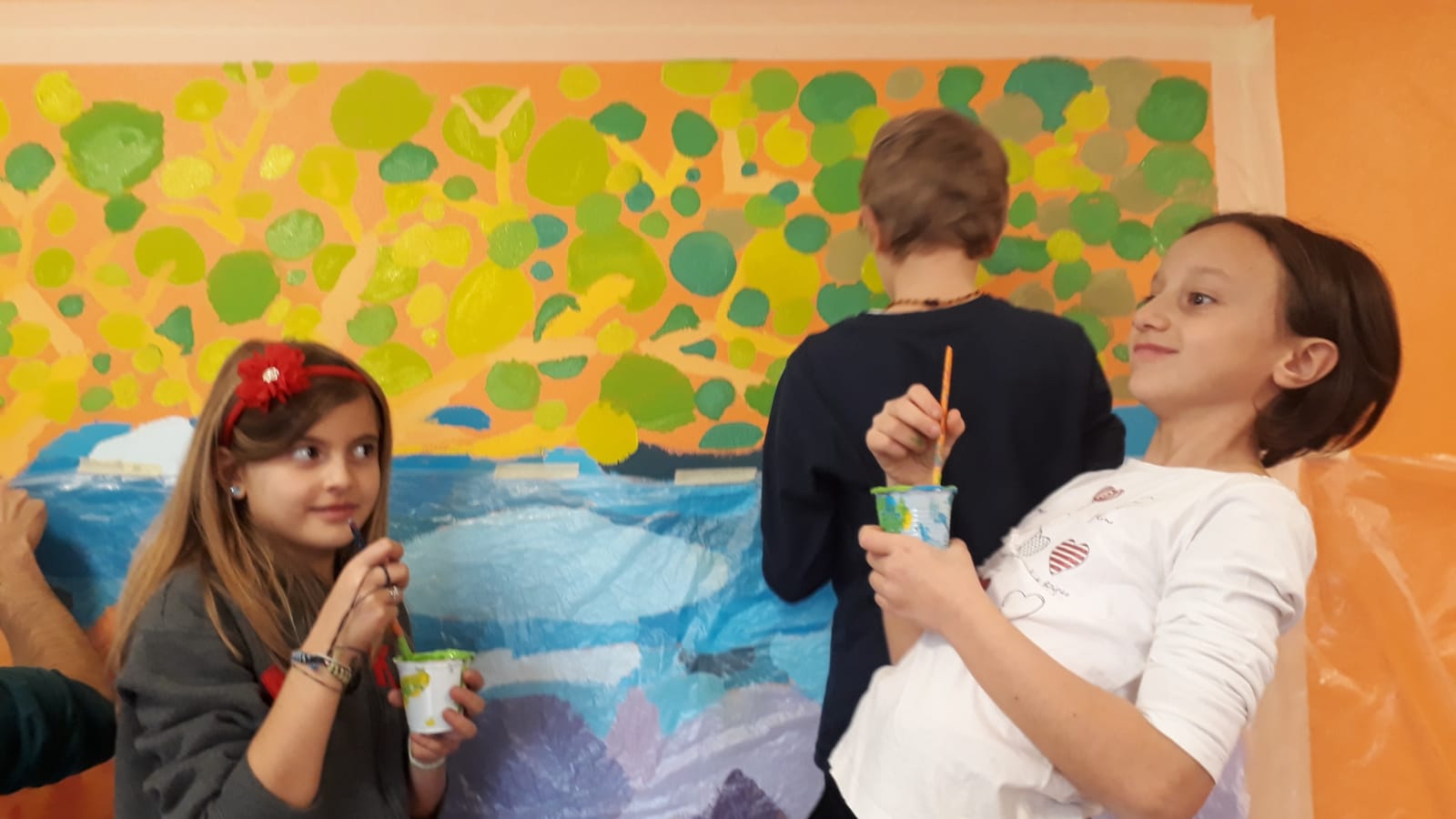 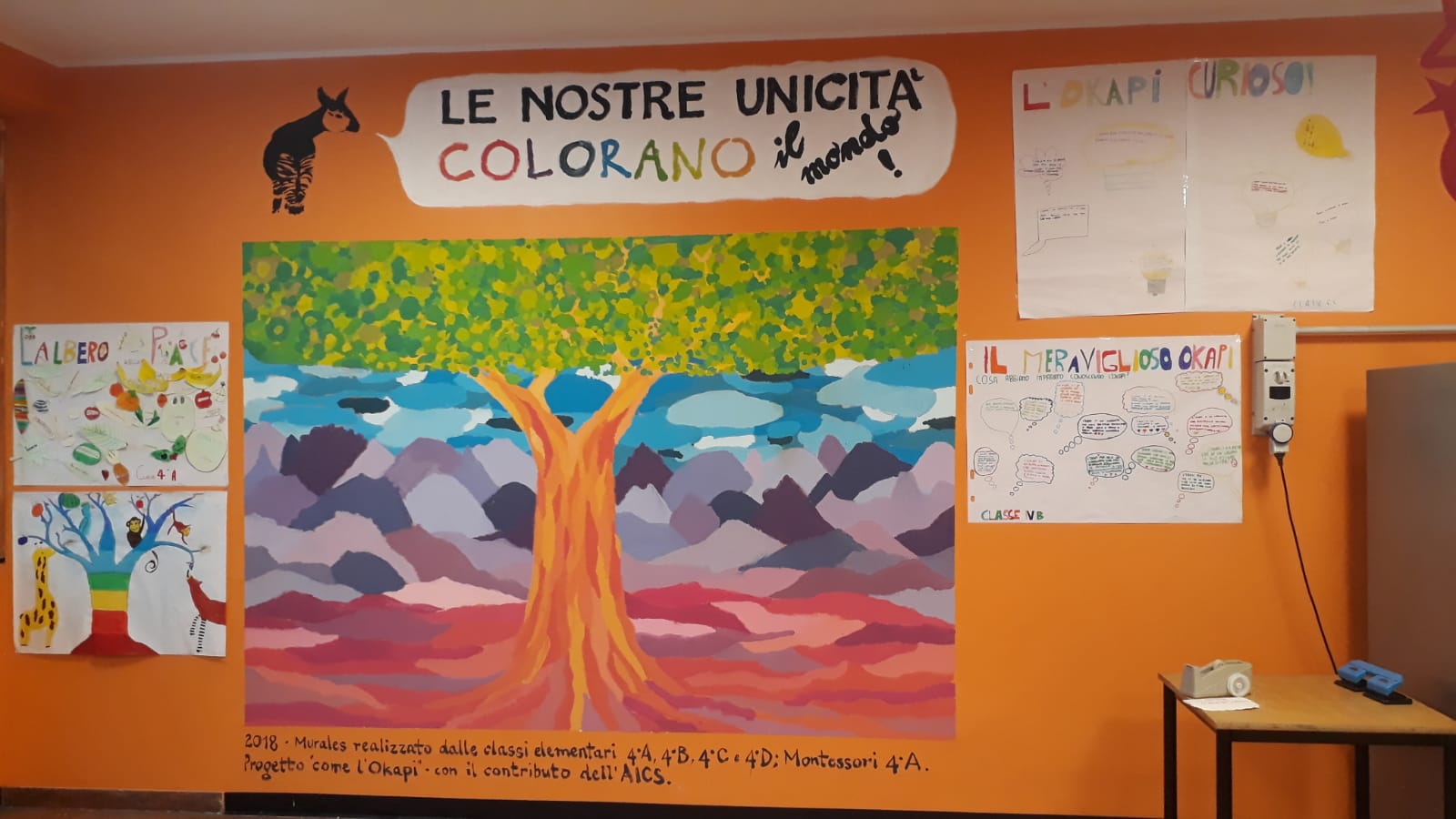 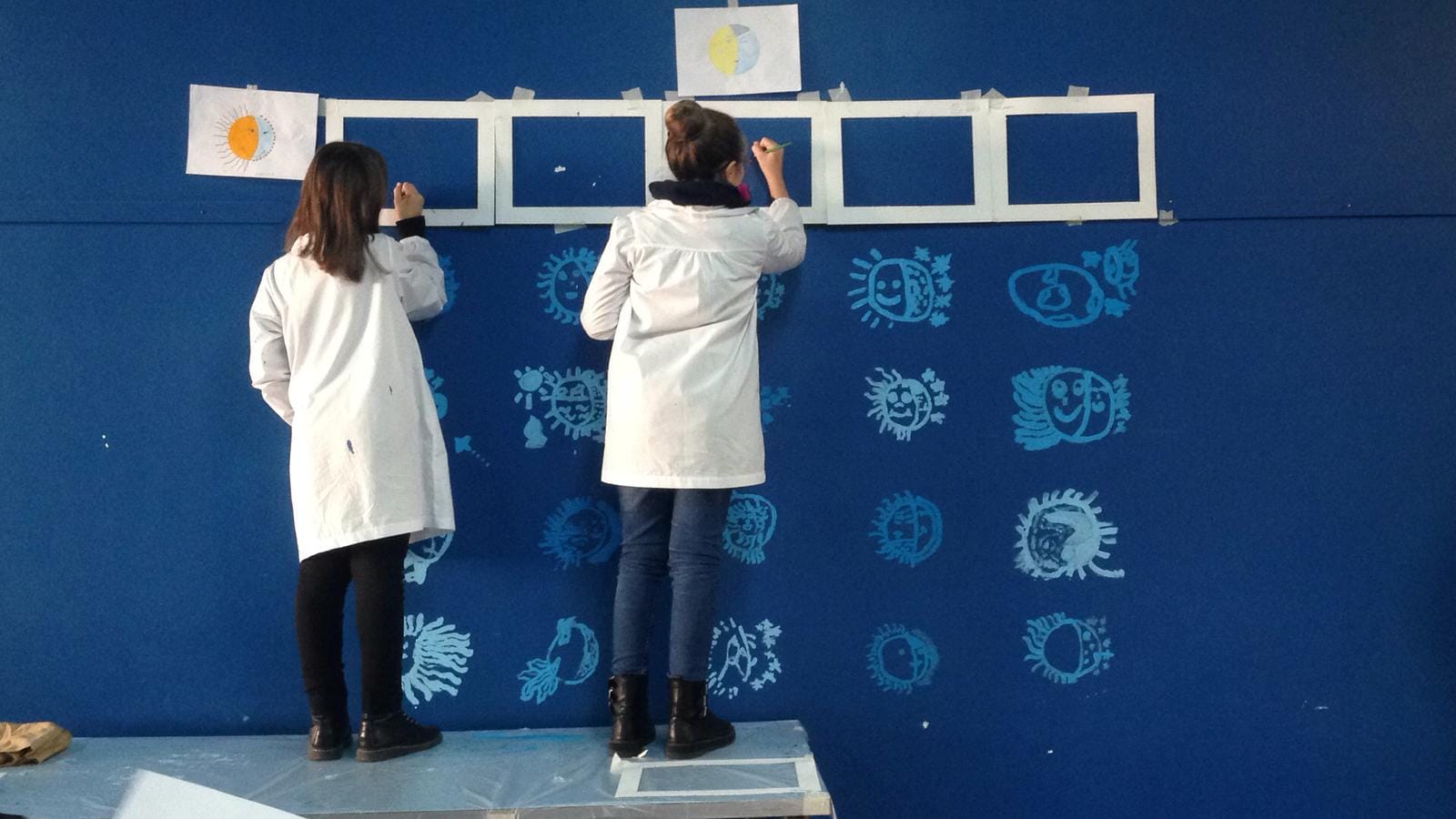 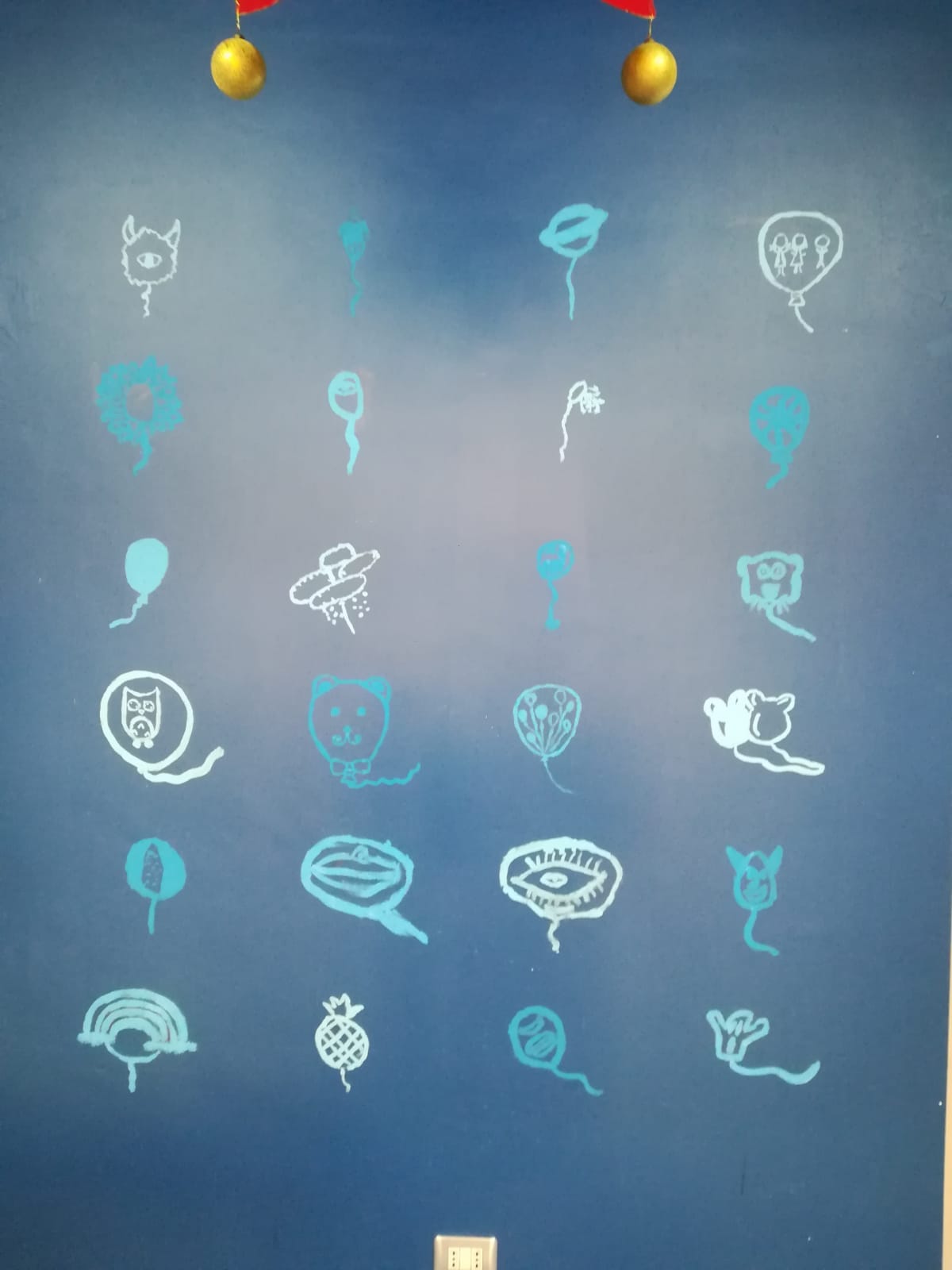 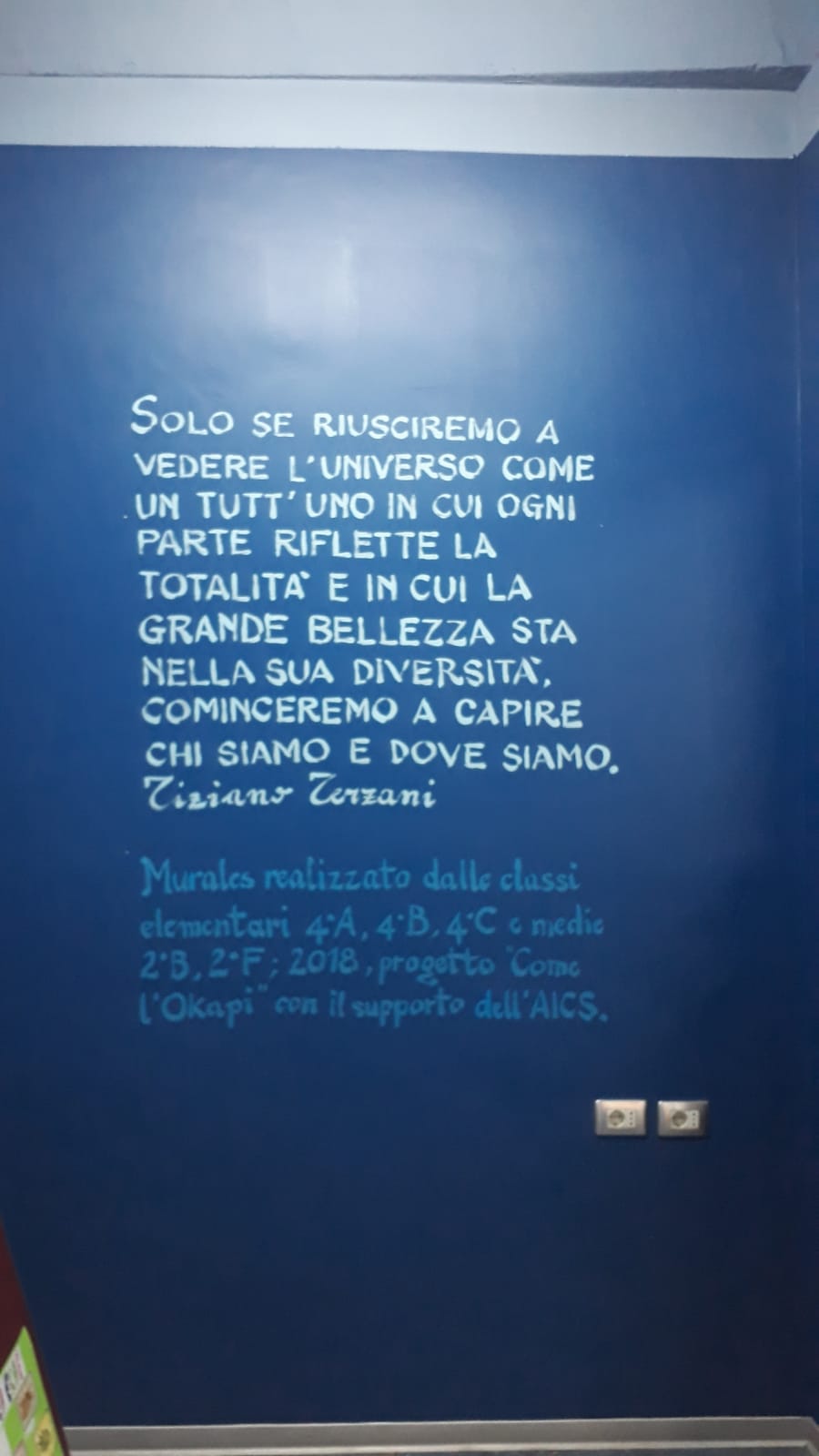 On Thursday 18 October 2018 the presentation of the “Rural Quelimane: produces, grows and consumes sustainable” project was held in Milan, which saw the involvement of the Mozambican Embassy in Italy, the Mozambican community of Rome and Milan and associations, institutions and NGOs operating in Mozambique.

“Rural Quelimane” is a project promoted by Mani Tese and co-financed by AICS the Italian Agency for Development Cooperation.

The aim of the project is to promote sustainable agriculture that can produce local, healthy and nutritious food for the inhabitants of Quelimane and, at the same time, encourage and support innovative production practices and policies that make farmers and traders in the urban and peri-urban area grow. of the city.

“The agricultural sector is the basis of the economy of Northern Mozambique and employs 80% of the active population – declares Giulia Donnici, Cooperation Office of Mani Tese – For this reason, the strengthening of a local agricultural market can represent an effective tool to reduce poverty while generating sustainable development. As part of the project, the adoption of innovative and sustainable practices in the production, marketing and consumption of local agricultural products will be promoted “.

Despite the economic expansion that has characterized the country in recent years, Mozambique continues to occupy low positions in the Human Development Index, ranking 181st out of a total of 188 countries (UNDP, 2016).

The Province of Zambezia, the intervention area of ​​the “Quelimane Agricole” project, is one of the poorest in the country: 2016 World Bank data estimate that 70% of the Zambezi population is below the poverty line and that in this province and half (48%) of the poor in the country are resident in Nampula.

The launch event of the project, organized as part of the World Food Day, saw the participation of a Mozambican cook, Abida Abubacar, and the starred chef Paolo Gramaglia who created a showcooking of dishes inspired by the culinary tradition of Mozambique , whose recipes are available at this link.

Video and photogallery below:

“All over the world, violence against women reveals the historical legacy of a society marked by gender discrimination – says Paola Toncich, Coordinator of Mani Tese’s project – but in Guinea-Bissau it takes on different and even more atrocious forms than to those known in Europe, such as forced marriage, early marriage and female genital mutilation”.

According to a study* carried out in 2011 by organizations for the defense and promotion of gender equality, 85% of violence against Guinean women occurs in the family environment and in 67% of cases the aggressors are spouses, while in 33 % other family members.

Although in 2014 the “Law on the criminalization of all acts of violence practiced in the context of domestic and family relations” was promulgated in Guinea-Bissau, there are currently no judged cases.

The same study indicates that in the country, between 2006 and 2010, 23,193 cases of domestic violence were registered by the judicial and security authorities but 71% of the victims interviewed never filed a complaint. On average, only 5 cases of domestic violence are reported per day across the country. (*“Quadro legal dos direitos humanos”, Liga guineense dos direitos humanos, settembre 2015).

There are three factors that dissuade women from reporting: lack of knowledge of the law and of women’s legal rights; the lack of competence of state structures and in particular the police; the lack of capacity of the state and traditional organizations to protect victims.

The situation of uncertainty about the data becomes more acute when the phenomenon of forced marriage is analyzed, i.e. the union between persons without consent or against the will of the spouses or of one of the spouses, which in Guinea-Bissau has not yet been regulated in violation to national and international obligations, in particular those of the Constitution of the Republic (which prohibits physical and moral violence) and the Convention on the Elimination of All Forms of Discrimination Against Women (CEDAW), adopted in 1979 by the United Nations General Assembly, which Guinea Bissau ratified in 1985.

In Guinea-Bissau, the practice of forced marriage is common to almost all ethnic groups, which number more than a dozen: 41% of the women interviewed in a 2011 study (“A portrait of violence against women in Guinea-Bissau”) declared that she did not participate in the choice of her husband. In the absence of a norm of positive law, it is in fact the customary one to be implemented which determines 14 years as the minimum age of marriage for women.

“Forced marriage – continues Paola Toncich – in addition to influencing the principle of freedom and self-determination of women, endangers their physical and moral integrity and makes the situation even more alarming when associated with early marriage, with consequences such as abuse sexual intercourse, early pregnancies, school dropouts and maternal mortality “.

The project FREE FROM VIOLENCE

It is in this context that the European Union funded project “FREE FROM VIOLENCE” kicks off, whose original name is ‘No na cuida de no vida, mindjer – Emancipation and rights for girls and women in Guinea Bissau – pilot project‘ which in Creole, the local language, means ‘We take care of our life’.

The inability of women to access the formal judicial system is one of the challenges to be faced in ensuring both judicial and police protection for victims, together with that of guaranteeing emergency social services to facilitate the recovery and social reintegration of female victims of violence and of girls escaping from forced marriage.

The role of Mani Tese within the project will be precisely to strengthen, in collaboration with GEIOJ (Gabinete Estudos Informaçao and Orientaçao Juridica), the access centers to justice and the local police through specific training on the subject and building an integrated accompaniment network and specific services for victims, in which the heads of psychosocial services will also be involved.

“In the country, three regional victim attention service centers and a shelter will be created and equipped, which will provide educational, psychosocial and legal assistance – concludes Paola Toncich – In addition, some informal spaces will be selected, consisting of a certain number of families who, in an autonomous and independent way, welcome women. The goal is to provide these different reception spaces with a common methodology, to be built through the participation of partners, civil society organizations and competent ministries “.

The activities will take place in collaboration with the Portuguese NGO Fundaçao Fe E Cooperaçao (FEC) and the Italian association Ente Nazionale Giuseppini del Murialdo (ENGIM). The first will deal with parental and marital education in 46 communities in 4 regions of the country (Quinara, Tombali, Bafatá and Gabu) through the local partner Rede Ajuda (RA), who will train socio-community agents. In addition to training, FEC will also promote awareness campaigns in selected communities on the rights of women and girls and strengthen regional victim support centers and the existing telephone line for complaints.

ENGIM will focus mainly on the prevention of gender-based violence and on the empowerment of Guinean women through the activation of a professional training course in hotel and home management aimed at girls aged 12 to 14 residing in the autonomous sector of Bissau to promote acquisition of professional skills and at the same time guaranteeing rapid reporting of suspected cases of violence. It will also promote the support of 4 micro-enterprises of women and the creation of the first employment agency for women.

The various actors involved will periodically meet around a thematic table which will have, as its objective, to work on the construction of a national plan for the prevention and fight against domestic and gender violence to spread a culture of peace and gender equality.

Today, in the Cacheu region (Guinea Bissau), the celebration of the World Refugee Day promoted by UNHCR was held.
An event that wanted to celebrate the strength, courage and resilience of people forced to leave their homes and their countries due to wars, persecutions and human rights violations. Mani Tese also participated in the day, as implementing partner of the project funded by UNHCR in Guinea Bissau.

This is a project undertaken this year by Mani Tese as part of the UNHCR operational program, which aims to monitor and support the Senegalese refugees present in the country through community economic development and the protection of their human rights.

The day represented an opportunity for entertainment with refugees and host communities in the region with sporting and cultural activities and a concert to remember how important it is to have good coexistence and a welcoming spirit. 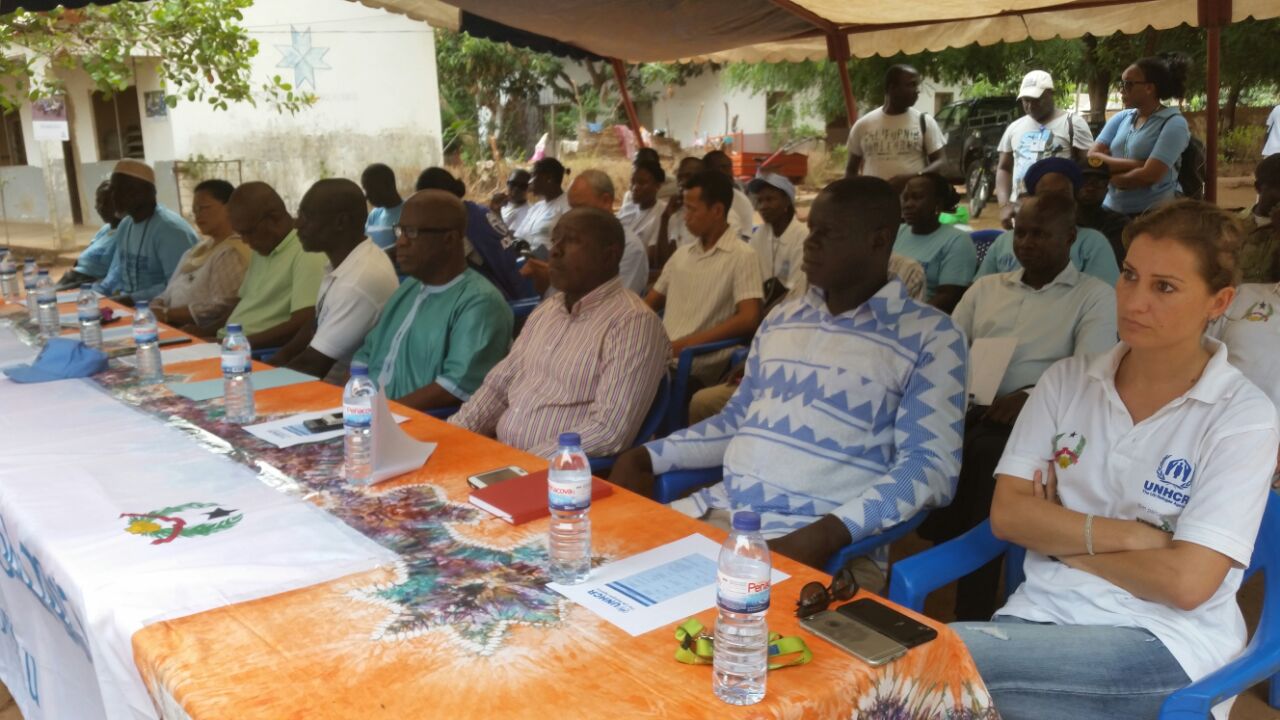 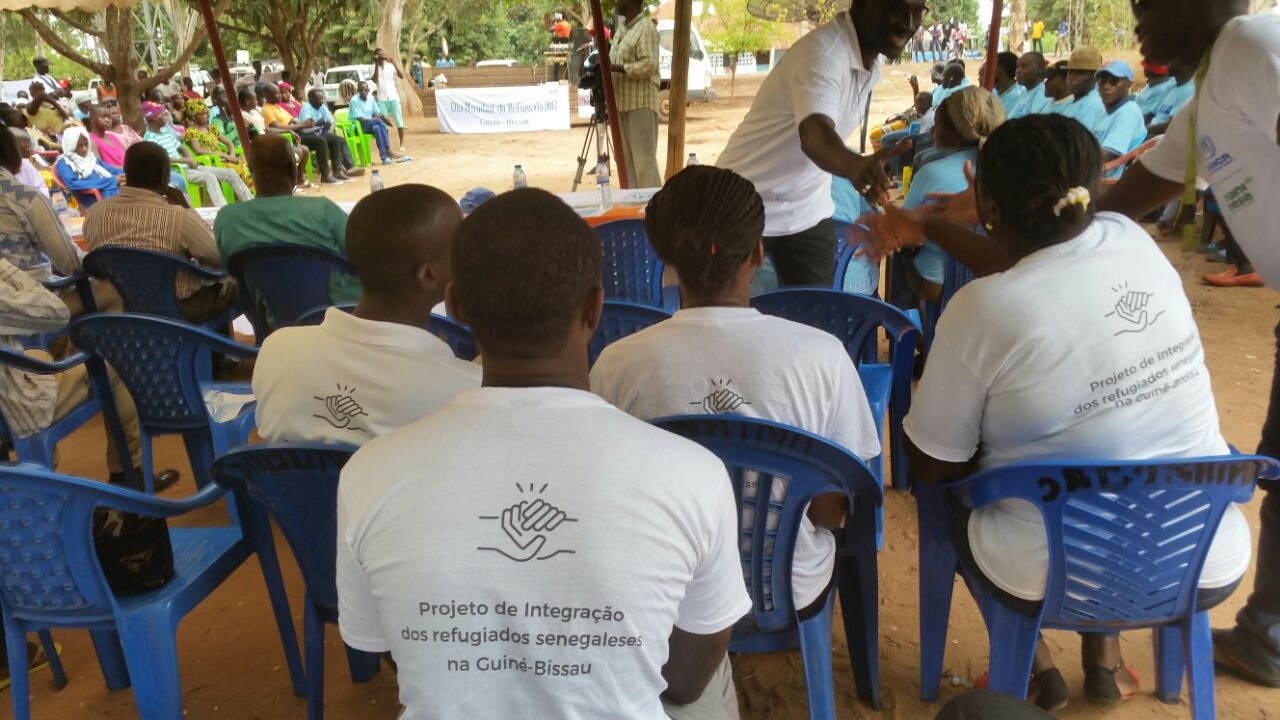 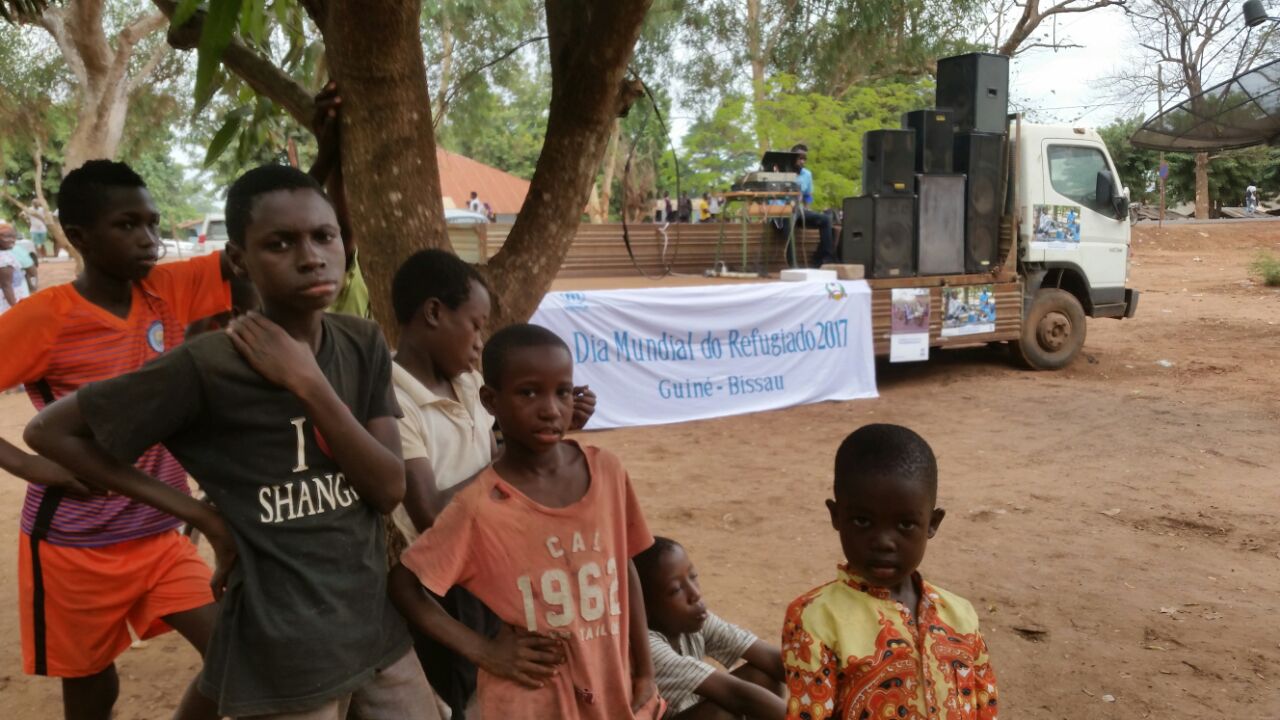 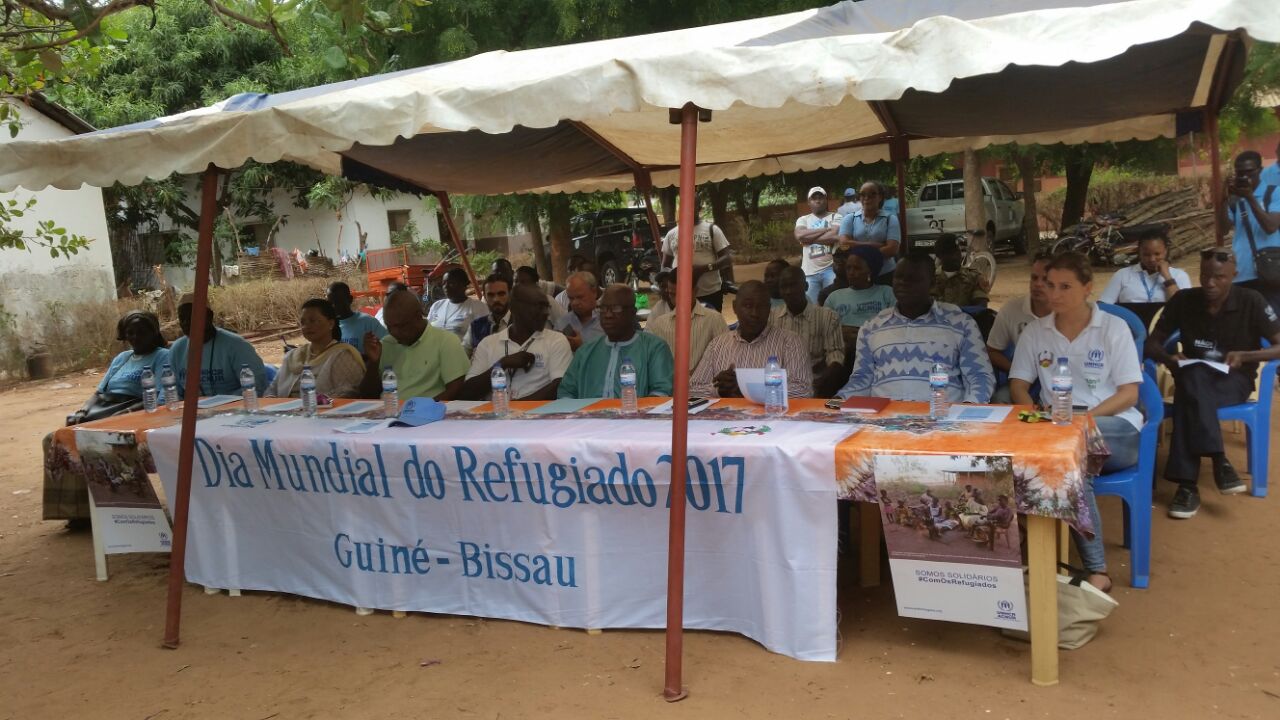 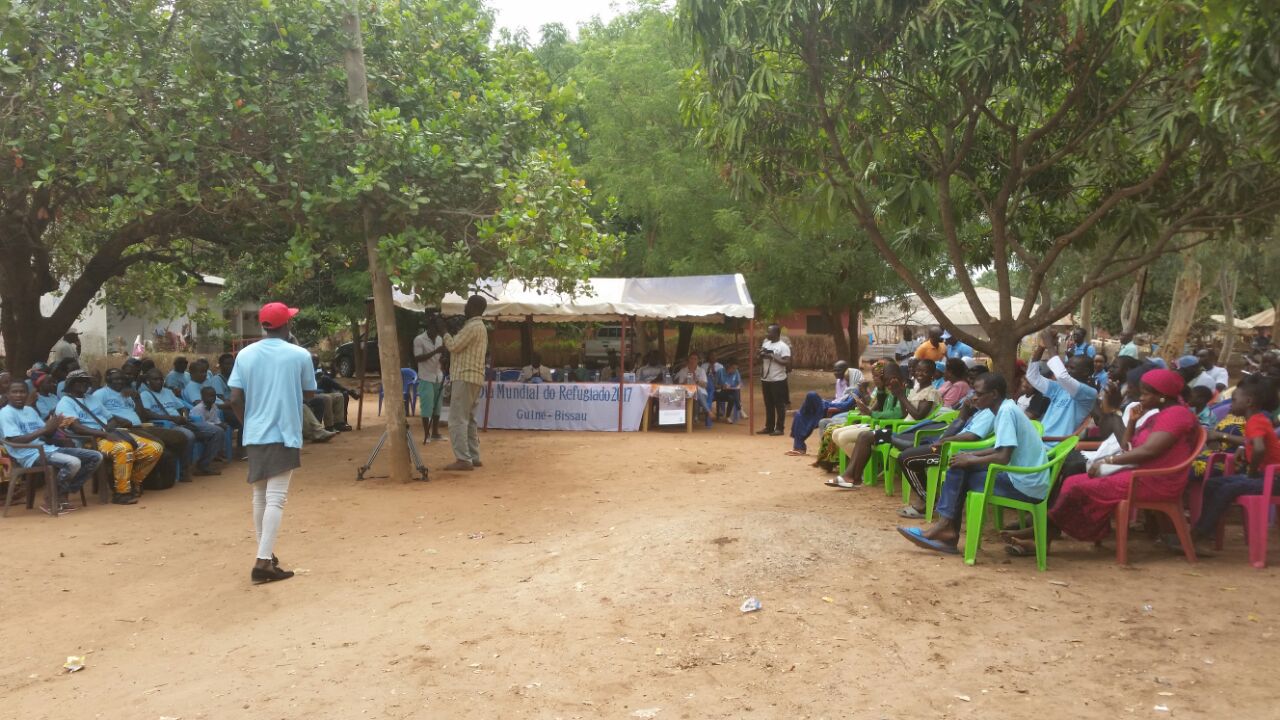